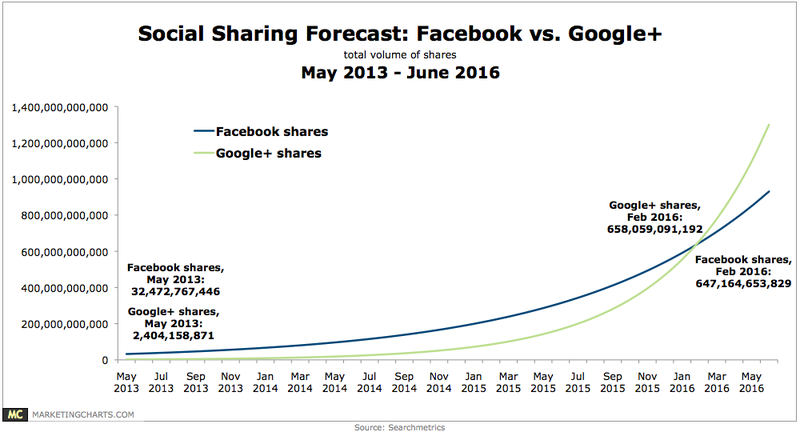 Presently, Facebook outpaces Google+ with regard to social shares but a comparison of growth rates over the past six months indicates that Google+ may take the lead by February 2016. This is according to a study conducted by SearchMetrics between November 2012 and April 2013.

The study revealed that the growth rate of Google+ shares was approximately 18.5% per month, almost double that of Facebook (9.3%). While the growth rate predicts that Google+ will surpass Facebook within a three-year period, an article from Marketing Charts mentions the many unknown variables that can influence social activity. According to the study, the growth rates do not factor in how active users are in regard to the social platform. For example, only 1 in 4 Google+ users is regularly actively engaged or sharing on the site.

The Marketing Charts article stated, “So while February 2016 may not be the month that sharing on Google+ overtakes Facebook, it’s interesting to note that at the least it’s rising at a more rapid rate.” Representatives from SearchMetrics agree that it will take further evaluation in order to grasp the direction Google+ will take in the next three years.

As it stands now, Facebook remains the primary social platform among users and should still be considered a valuable asset for brands to reach large audiences due to its high rate of social sharing. For Google+, should growth rate follow the SearchMetrics predictions, it's possible it may develop more prestige as a social sharing space.