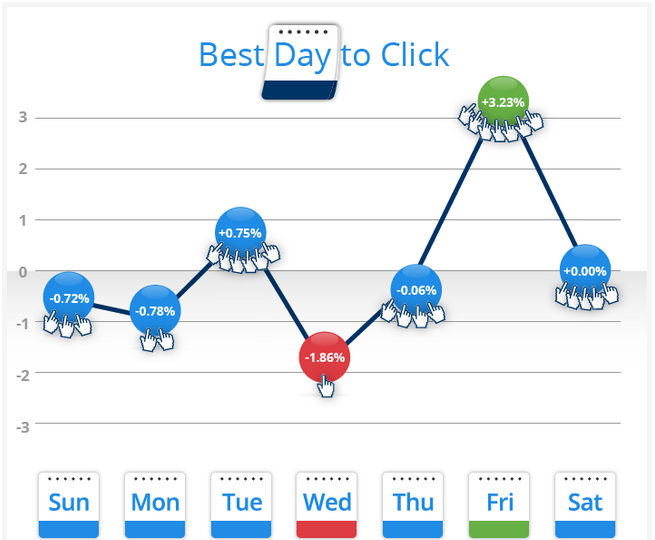 A recent report from Infolinks uncovered key insights about online advertisement click-through rates (CTRs), including which U.S. states, day of the week, and hour of the day performed best in terms of CTR.

According to first quarter 2013 figures based on a sample of 1 trillion impressions from its 100K publisher network, Infolinks discovered that the four states with the highest CTR (Mississippi, South Carolina, Alabama, and Louisiana) were all located in the southern part of the United States. States with the lowest CTR (California, Iowa, Georgia, and Washington) appeared to be scattered across the country. While California-based visitors clicked on ads much less often than average (-24%), users in Mississippi clicked on ads much more often than usual (+17%).

Infolinks found that CTRs on Fridays peak at roughly 3%, nearly 4% higher than most days of the week, which Infolinks claims is surprising, given Friday is “the day the industry always agreed wouldn’t perform well since consumers are generally focused on getting out of the office.” A MarketingProfs article analyzing the report findings reveals CTRs hit their lowest on Wednesdays, when they dip to -1.86% below Infolink's average.

However, the research also indicates visitors interact more with ads during the day (between the hours of 11:00 am and 2:00 pm), which is not a surprise, since many users are “fully engaged with their computers” during the middle of the workday. “Later at night, between 11:00 pm to 2:00 am, there is a significant drop in CTR, -21% below the average, which may be due to more leisurely browsing while watching TV or engaging in other activities,” according to the report.

Infolinks reports its research can help those executing PPC campaigns from “making assumptions about when and where audiences will or won’t click.” By carefully examining the data, Infolinks claims companies can make better informed decisions.