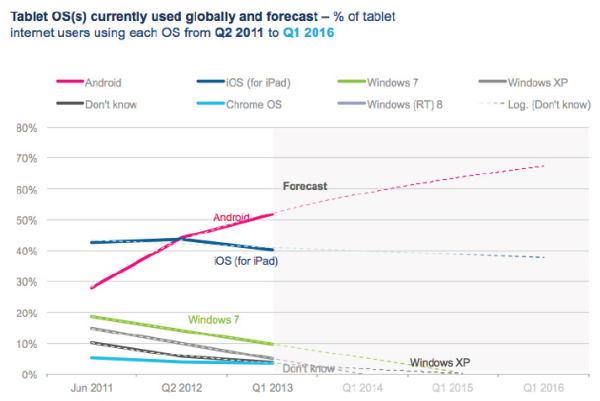 Studies from both Pew Internet and GlobalWebIndex found that global tablet ownership is up 282% since 2011 and is expected to rise throughout 2013. Android devices reportedly hold the highest number of users and will likely continue to outpace iOS for iPad and Windows tablet ownership.

Two articles from Marketing Land highlighted the study findings, which revealed the primary influencers on tablet acquisition. Some of the most significant findings include the following:

The Pew Internet study results indicate that 56% of households earning approximately $75,000 own a tablet and as ownership expands purchases are expected to be made on devices with screens smaller than 8”.

According to GlobalWebIndex, there is a distinction between smartphone users and tablet users: “Smartphone owners tend to be younger and slightly more male, but not fixated on income. In contrast, tablet users tend to be more middle-aged and male, but also wealthier than average.”

As mobile devices continue to evolve and gain popularity, it may be necessary for marketers to adjust how their digital marketing campaigns are approached.